Why We Moved To eXp

Well, I've worked for a few different real estate companies. I worked for Coldwell Banker for a little more than a decade. I worked for RE/MAX for a decade, and of course, last year we broke out, and our team, opened our own brokerage, Waypost Realty. I want to be able to leverage technology because that's where things are going, every industry is changing certainly after COVID and going through COVID, but I want to be able to have a mechanism to be able to scale our business now and in the future. Let's say we wanted to open an office in Whiteville North Carolina. Well, we don't actually have to physically open an office in Whiteville North Carolina, because eXp has got a completely cloud-based solution, basically, it's one brokerage over the entire nation and other countries. So I literally could operate any part where I have a real estate license which is North Carolina. So I could be involved with transactions in Asheville, if I had somebody there, I could have a team member there. But it allows me to leverage eXp's platform to be able to utilize it for our needs.

I've been watching them for a long time and I'm not going to lie, I laughed at them. I didn't think they were going to be anything. Kind of like we did years ago when we first started RE/MAX there used to be commercials making fun of Keller Williams, how it's a pyramid, all these kinds of things. And well, of course, you hear the same naysayers about eXp. What I've watched him do it, I've watched a number of my friends that I've known from Star Power and from other networking groups over the years, and a number of them have moved and gone over to eXp, what's happened is they've strived. And now they've got their own network and it's like a virtual star power.

It's really nice. So I get the enjoyment of working with all these people I've been working with for a long time. I learn things from them, I share things with them. But they're under this platform and I've watched the eXp go from 3000 agents a few years ago to 40,000 plus agents. That's a long answer, but in a nutshell, that's kind of what made me look at it. I've been out there, but I see them as a disruptor of the industry and I have the back end of a lot of decisions and I certainly am not at the forefront of this, but I'm also not on the tail end of it.  Learn more about eXp Realty

I just see it as a way so that I can create more value for our team, for the agents that work with me now and in the future, and also for our clients because we're going to do things with their infrastructure. We can leverage their infrastructure for things that you can't really do in your office and you can't do it when you're just a single point. So we basically have a real estate office without walls.  SCHEDULE A CALL WITH BUDDY 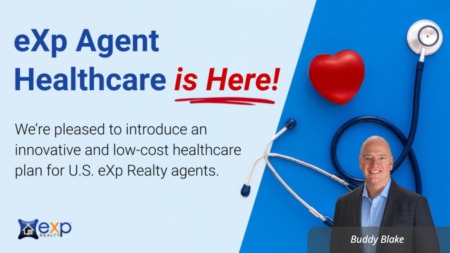 Healthcare is a big issue in the real estate business. The National Association of Realtors has been trying to make that happen and make it legal to ...Read More 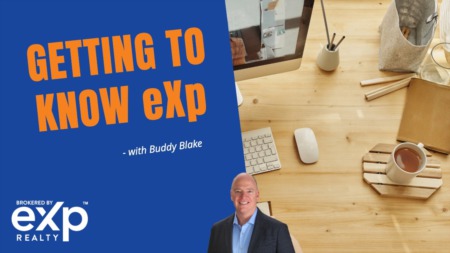 Getting To Know eXp

Join OUR TEAM
at eXp Realty!