Who Was Thomas Jefferson? 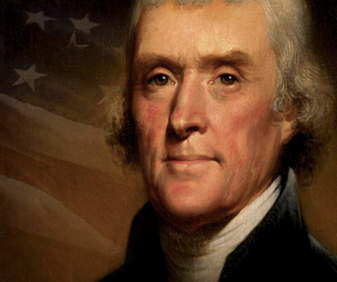 Thomas Jefferson was one of Founders of America and one of the principle architects of the Declaration of Independence. Jefferson was a big support on liberty and said “I would rather be exposed to the inconveniences attending too much liberty than to those attending too small a degree of it.”

A leading member of the country’s development and third president of the United States, Jefferson was also responsible for the Louisiana Purchase in 1803. This doubled the size of the US and the 600 million acres was purchased for four cents an acre from France. This deal led the way for the young country to make more land purchases other than war.

We will look at six facts on Thomas Jefferson, and who he really was according to history.

Jefferson was born in Virginia, and would have been 273 years-old in 2016. He was remembered for not only his passion for liberty, but a thirst for books and knowledge. He owned a rotating stand that could hold up to five books as once. He had a library, but this was destroyed by the British, and he sold it to pay down debts. Don’t worry--Jefferson would collect over 6,000 more books afterwards.

Jefferson was an architect and designed plans for houses, churches, and the rotunda for the University of Virginia. Jefferson drew and built his two-story home, Monticello, using slaves, mostly inherited from his father. He opposed slavery believing it was a threat to the nation, and drafted a law stopping the importation of African slaves, but continues to own and sell them.

Jefferson, who owned two vineyards, loved wine. He preferred wine over hard cider. “No nation is drunken where wine is cheap; and none sober, where the dearness of wine substitutes ardent spirits as the common beverage.”

He also was a scribe. There are about 27,000 documents collected that Jefferson wrote, and 19,000 letters.

He loved ice-cream, and returned from France with a recipe—one of the first ice-cream recipes in America. The American colonies enjoyed this desert in the mid 1700s, and made its way into cookbooks in North America by 1792.

Jefferson was called “the Man of the people.” He shook hands with supported and welcomed visitors to the White House wearing a robe and slippers. George Washington and John Adams didn’t like to shake hands with people.

Jefferson died broke. He took on personal debt because of serving guests elaborate dinners, and wine. His love of wine cost him $10,000 yearly, and at the end of his life he was $107,000 dollars in debt. As far as public debt he said:

“I place economy among the first and most important of virtues, and public debt as the greatest of dangers to be feared.” “To preserve our independence we must not let our leaders load us with perpetual debt. ….If we can prevent the government from wasting the labors of the people under the pretence of caring for them, we will be wise.”

Come stop by the Poplar Grove Farmers' Market and see the food the local Wilmington area residents have grown, caught, or baked themselves. The ...Read More

The Cameron Art Museum is holding an art exhibition called Twenty Years, celebrating their most memborable showings from the past two decades. Among ...Read More

Last Fireworks By The Sea on September 2

It's the final Fireworks By The Sea event of the summer of 2022 this Friday, September 2nd. Come down to the Carolina Beach Boardwalk and listen to ...Read More