myth: "Success comes from knowing what to do"

truth: "Success comes from doing more of what we already know to do"

— from "Deliver the Unexpected" by Richard Robbins

Good Monday morning, this is Buddy Blake, Waypost Realty here in Wilmington, North Carolina. Wanted to reach out and wish you and your family, a Happy Halloween coming up this coming weekend, Saturday. So, that'll be exciting. The good news is for a lot of us, they are having Halloween. A little different this year, put the table at the end of the driveway. We're going to put a little fire pit behind our table. But anyway, so that'd be kind of neat. Looking forward to that. And I know our kids are. Hopefully we have some good fall weather.

Last week we shared some absorption reports and quite honestly I didn't realize how many people were looking at that. I have gotten a lot of questions about it. So what I thought I'd do is show you a couple more reports because we've got an issue going on here. We've got no houses for sale. Never seen anything quite like this. But I think when I show you the graphs coming up, I think you'll see what I'm talking about. And so if you're thinking about selling your house, there is not a better time than right now. We do think this thing's going to shift. Matter of fact, you're going to see a lot of our marketing move, right after the election, once we get past that, because that is a sticking point for a lot of people right now, just waiting on the election, but once we move past that. And we will move past it, folks. No matter who wins, we will move past it. And we will move forward. Things will go on.

But anyway, once we move past that, a lot of our local marketing towards sellers is going to be talking about don't miss this market if you're thinking about selling. We have a perfect storm for a seller, very low interest rates, still sub-three in most cases for good credit for a 30 year rate. And then also very low inventory, which leads to a lot of good things for sellers. But it is going to say "sell before the shift" because we do think a shift is coming. We do think things will change once everybody gets out of the mode of the election. Once politics is taken out of some of the other things that are going on in the world and it is not dominated by politics. We're going to move forward and we're going to see some things shift. 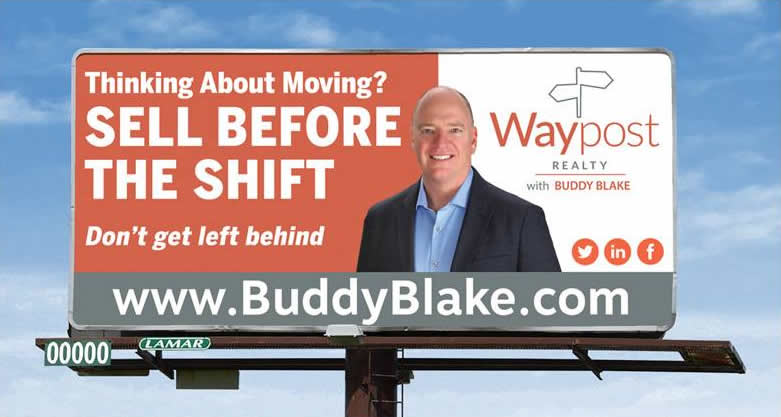 So anyway, I just wanted to talk about it a little bit and let you know what's coming as far as marketing. But real quick, I wanted to show you more reports, last week we talked about homes for sale. And this is the Three County area, which is pretty much from Topsail all the way down to the tip of South Carolina and North Carolina. It's a big swath of area. And this shows you the decline of inventory. 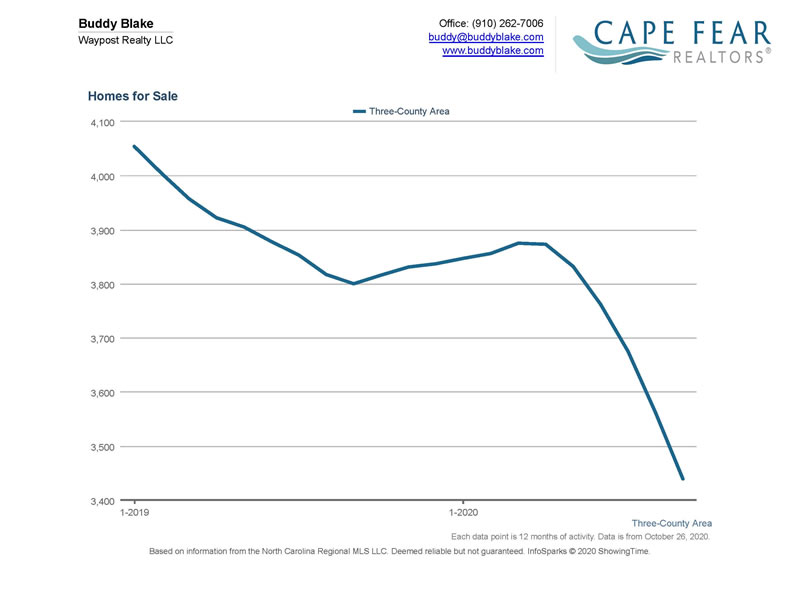 This is just one year graph. And you can see it has just absolutely fallen off. To the whole area, we only have a little over 3,400 homes for sale. And keep in mind, a lot of these homes are for sale but just haven't sold because they were overpriced when they first came on the market. Which is an absolute cardinal sin if you're wanting to sell your house. Because you will get punished if you get two/three weeks on the market here and your house isn't under contract. Because agents and buyers are going to presume there's something wrong with it or it's overpriced. And you just may not even get looked at. You got to come strong, come close to the right price and you'll get your best price then.

All right, that is the Three County area. Check this out, now this is Wilmington. 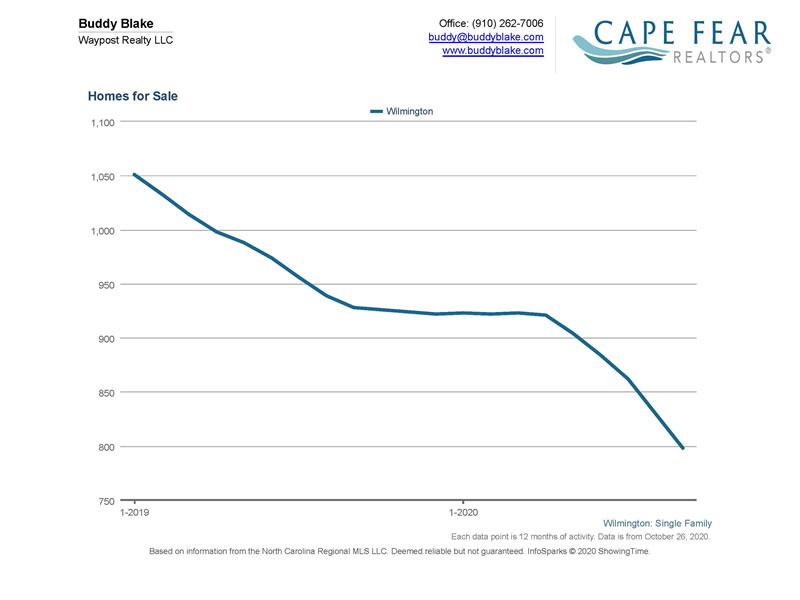 This is just Wilmington. This actually takes into account some lot sales that are sitting out there that haven't sold that have been on the market for many, many, many months. But we're still a little over 500 homes on the market. So this is where the inventory is just crashing.

And then when you look right here, we have less than three months supply all the way up to $700,000. Less than two months supply of homes in Wilmington for under $500,000. And less than one month, less than 30 day supply, up to $300k. And that is just unsustainable. It's just not going to keep going this way.

So, while we're going to have a swath of homes hit the market, the question is if you're a home seller, even if you're in a forbearance or a pre-foreclosure situation, are you going to act early while you have equity in your property? Or are you going to wait and start seeing the bad news that probably will come after the election. You're going to start seeing some of the unfavorable news that neither side wants anybody to see right now. There is going to be an ugly side to this thing. And you're going to see a downturn. And so if you want to be a seller, you want to do it now. You don't want to wait until next year, deep into next year. Because it is very uncertain as to what's going to happen. And keep in mind, while Wilmington is still going to be a place where a lot of folks want to move to because of our coastal area and the size. We're much smaller than a lot of the large metros. If they can't sell their houses in the north east and the west coast, many people can't buy here.

So as soon as you start seeing sales slow down in New Jersey, New York, Connecticut, Ohio, California, Colorado, places like that, that's when it's going to start affecting the local southern markets. Because they can't sell them there, they can't buy here in many cases. So anyway, I'm not being a doomsayer, but I am telling you that this just isn't going to keep going. And you want to get ahead of that as a seller. You do not want to get left behind. Because you won't know that the market shifted until six months, at least six months, after it's already shifted. And you're going to look back and start seeing charts where it started going the other way.

So great time to sell now. Wonderful time. You got buyers wanting to buy. There's not much inventory. And you're going to get top dollar right now. So I can't guarantee that come next spring. It might happen, but I would plan on that not happening.

So anyway, have a great week. And look forward to chatting next week. 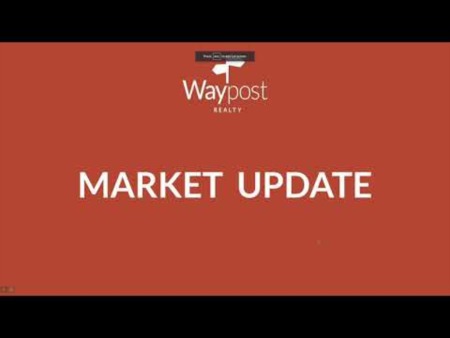 WILMINGTON, NC - In this video Buddy Blake, the owner of Waypost Realty in Wilmington NC, goes over the recent real estate market stats and what ...Read More 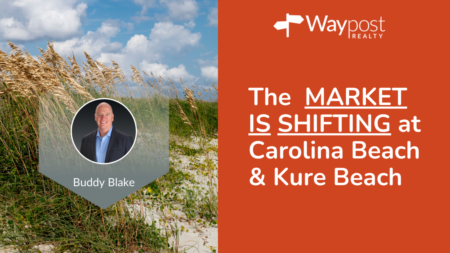 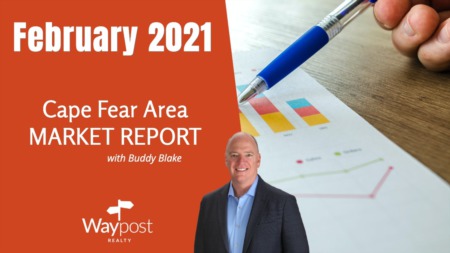 WILMINGTON, NC - The new year of 2021 is off to the races.  The Southeastern area of North Carolina (including Wilmington, Leland, Hampstead, ...Read More