Christmas at The Gas Station

The old man sat in his gas station on a cold Christmas Eve. He hadn't been anywhere in years since his wife had passed away. It was just anotherday to him. He didn't hate Christmas, just couldn't find a reason to celebrate. He was sitting there looking at the snow that had been falling for the last hour and wondering what it was all about when the door opened and a homeless man stepped through.

Instead of throwing the man out, Old George as he was known by his customers, told the man to come and sit by the heater and warm up. "Thank you, but I don't mean to intrude," said the stranger. "I see you're busy, I'll just go." "Not without something hot in your belly." George said.

He turned and opened a wide mouth Thermos and handed it to the stranger. "It ain't much, but it's hot and tasty. Stew ... Made it myself. When you're done, there's coffee and it's fresh."

Just at that moment he heard the "ding" of the driveway bell. "Excuse me, be right back," George said. There in the driveway was an old '53 Chevy. Steam was rolling out of the front. The driver was panicked. "Mister can you help me!" said the driver, with a deep Spanish accent. "My wife is with child and my car is broken." George opened the hood. It was bad. The block looked cracked from the cold, the car was dead. "You ain't going in this thing," George said as he turned away. 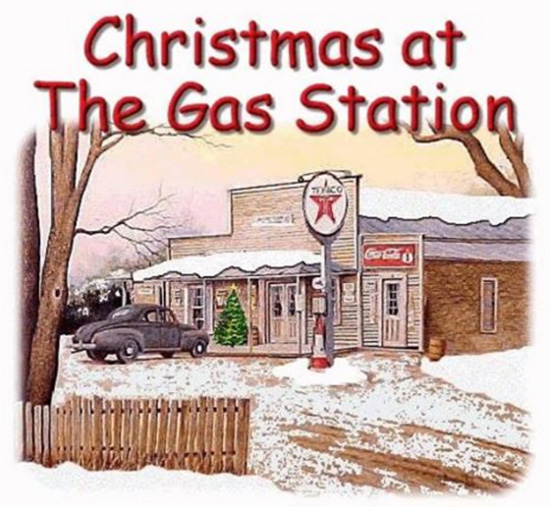 "But Mister, please help ..." The door of the office closed behind George as he went inside. He went to the office wall and got the keys to his old truck, and went back outside. He walked around the building, opened the garage, started the truck and drove it around to where the couple was waiting. "Here, take my truck," he said. "She ain't the best thing you ever looked at, but she runs real good."

George helped put the woman in the truck and watched as it sped off into the night. He turned and walked back inside the office. "Glad I gave 'em the truck, their tires were shot too. That 'ol truck has brand new ."

George thought he was talking to the stranger, but the man had gone. The Thermos was on the d

esk, empty, with a used coffee cup beside it. "Well, at least he got something in his belly," George thought.

George went back outside to see if the old Chevy would start. It cranked slowly, but it started. He pulled it into the garage where the truck had been. He thought he would tinker with it for something to do. Christmas Eve meant no customers. He discovered the block hadn't cracked, it was just the bottom hose on the radiator. "Well, shoot, I can fix this," he said to himself. So he put a new one on. "Those tires ain't gonna get 'em through the winter either." He took the snow treads off of his wife's old Lincoln. They were like new and he wasn't going to drive the car anyway.

As he was working, he heard shots being fired. He ran outside and beside a police car an officer lay on the cold ground. Bleeding from the left shoulder, the officer moaned, "Please help me."

George helped the officer inside as he remembered the training he had received in the Army as a medic. He knew the wound needed attention. "Pressure to stop the bleeding," he thought. The uniform company had been there that morning and had left clean shop towels. He used those and duct tape to bind the wound. "Hey, they say duct tape can fix anythin'," he said, trying to make the policeman feel at ease.

"Something for pain," George thought. All he had was the pills he used for his back. "These ought to work." He put some water in a cup and gave the policeman the pills. "You hang in there, I'm going to get you an ambulance."

The phone was dead. "Maybe I can get one of your buddies on that there talk box out in your car." He went out only to find that a bullet had gone into the dashboard destroying the two way radio.

He went back in to find the policeman sitting up. "Thanks," said the officer. "You could have left me there. The guy that shot me is still in the area."

George sat down beside him, "I would never leave an injured man in the Army and I ain't gonna leave you." George pulled back the bandage to check for bleeding. "Looks worse than what it is. Bullet passed right through 'ya. Good thing it missed the important stuff though. I think with time your gonna be right as rain."

George got up and poured a cup of coffee. "How do you take it?" he asked. "None for me," said the officer. "Oh, yer gonna drink this. Best in the city. Too bad I ain't got no donuts." The officer laughed and winced at the same time.

The front door of the office flew open. In burst a young man with a gun. "Give me all your cash! Do it now!" the young man yelled. His hand was shaking and George could tell that he had never done anything like this before.

"That's the guy that shot me!" exclaimed the officer.

"Son, why are you doing this?" asked George, "You need to put the cannon away. Somebody else might get hurt." The young man was confused. "Shut up old man, or I'll shoot you, too. Now give me the cash!"

The cop was reaching for his gun. "Put that thing away," George said to the cop, "we got one too many in here now."

He turned his attention to the young man. "Son, it's Christmas Eve. If you need money, well then, here. It ain't much but it's all I got. Now put that pea shooter away."

George pulled $150 out of his pocket and handed it to the young man, reaching for the barrel of the gun at the same time. The young man released his grip on the gun, fell to his knees and began to cry. "I'm not very good at this am I? All I wanted was to buy something for my wife and son," he went on. "I've lost my job, my rent is due, my car got repossessed last week."

George handed the gun to the cop. "Son, we all get in a bit of squeeze now and then. The road gets hard sometimes, but we make it through the best we can."

He got the young man to his feet, and sat him down on a chair across from the cop. "Sometimes we do stupid things." George handed the young man a cup of coffee. "Bein' stupid is one of the things that makes us human. Comin' in here with a gun ain't the answer. Now sit there and get warm and we'll sort this thing out."

The young man had stopped crying. He looked over to the cop. "Sorry I shot you. It just went off. I'm sorry officer." "Shut up and drink your coffee " the cop said. George could hear the sounds of sirens outside. A police car and an ambulance skidded to a halt. Two cops came through the door, guns drawn. "Chuck! You ok?" one of the cops asked the wounded officer.

"Not bad for a guy who took a bullet. How did you find me?"

"GPS locator in the car. Best thing since sliced bread. Who did this?" the other cop asked as he approached the young man.

Chuck answered him, "I don't know. The guy ran off into the dark. Just dropped his gun and ran."

George and the young man both looked puzzled at each other.

The paramedics came in and loaded Chuck onto the stretcher. The young man leaned over the wounded cop and whispered, "Why?"

Chuck just said, "Merry Christmas boy ... and you too, George, and thanks for everything."

"Well, looks like you got one doozy of a break there. That ought to solve some of your problems."

George went into the back room and came out with a box. He pulled out a ring box. "Here you go, something for the little woman. I don't think Martha would mind. She said it would come in handy some day."

The young man looked inside to see the biggest diamond ring he ever saw. "I can't take this," said the young man. "It means something to you."

"And now it means something to you," replied George. "I got my memories. That's all I need."

George reached into the box again. An airplane, a car and a truck appeared next. They were toys that the oil company had left for him to sell. "Here's something for that little man of yours."

The young man began to cry again as he handed back the $150 that the old man had handed him earlier.

"And what are you supposed to buy Christmas dinner with? You keep that too," George said. "Now git home to your family."

The young man turned with tears streaming down his face. "I'll be here in the morning for work, if that job offer is still good."

George turned around to find that the stranger had returned. "Where'd you come from? I thought you left?"

"I have been here. I have always been here," said the stranger. "You say you don't celebrate Christmas. Why?"

"Well, after my wife passed away, I just couldn't see what all the bother was. Puttin' up a tree and all seemed a waste of a good pine tree. Bakin' cookies like I used to with Martha just wasn't the same by myself and besides I was gettin' a little chubby."

The stranger put his hand on George's shoulder. "But you do celebrate the holiday, George. You gave me food and drink and warmed me when I was cold and hungry. The woman with child will bear a son and he will become a great doctor.

The policeman you helped will go on to save 19 people from being killed by terrorists. The young man who tried to rob you will make you a rich man and not take any for himself. "That is the spirit of the season and you keep it as good as any man."

George was taken aback by all this stranger had said. "And how do you know all this?" asked the old man.

"Trust me, George. I have the inside track on this sort of thing. And when your days are done you will be with Martha again."

The stranger moved toward the door. "If you will excuse me, George, I have to go now. I have to go home where there is a big celebration planned."

George watched as the old leather jacket and the torn pants that the stranger was wearing turned into a white robe. A golden light began to fill the room.

Merry Christmas to you, Erin, and your lovely little ladies. You are a good man and have earned the blessings you have. I will pass this story on to many of my friends and family.

Thank you very much for that lovely story. I was really touched by it.

Come stop by the Poplar Grove Farmers' Market and see the food the local Wilmington area residents have grown, caught, or baked themselves. The ...Read More

The Cameron Art Museum is holding an art exhibition called Twenty Years, celebrating their most memborable showings from the past two decades. Among ...Read More

Last Fireworks By The Sea on September 2

It's the final Fireworks By The Sea event of the summer of 2022 this Friday, September 2nd. Come down to the Carolina Beach Boardwalk and listen to ...Read More